The Joe Nunn $1000.00 scholarship is open to graduating students that have been accepted to a recognized college or educational institute.

SAANICH — CUPE Local 441 members voted to accept the tentative agreement at a ratification meeting on Sunday afternoon. CUPE members will be back in classrooms as schools reopen Monday morning.

The agreement includes general wage increases of two per cent in each year of the three-year contract as per the Provincial Framework Agreement (PFA).

The union and employer were able to bring CUPE 441 members to, or significantly closer to, wage parity within the region.

The Local and District will establish a recruitment and retention working group that will meet on a regular basis.

CUPE 441 President Dean Coates thanked the bargaining committee for their hard work and the community for their strong support.

“We could not have reached this agreement without the backing of this community,” said Coates. “We commit to working with the School District to build a relationship of respect moving forward.”

Coates said that members are excited to get back into classrooms and work with the students they support.

View photos from the strike here.

SAANICH — CUPE Local 441 and School District 63 have reached a tentative agreement. Members will be holding a ratification meeting on Sunday to vote on the agreement signed by both parties Saturday morning. In a show of good faith, picket lines will come down and schools will be open on Monday.

“This strike has been difficult and we are pleased to have an agreement that the bargaining committee is recommending to our membership for acceptance,” said CUPE 441 President Dean Coates. “I’d like to thank our members, parents, teachers and the community for their support throughout, and the District for their commitment to Saanich schools and students.”

CUPE 441 will not be commenting on any details of the tentative agreement until after the ratification vote is completed.

CUPE 441 took job action on October 28 and have been on strike for three weeks.

SAANICH – CUPE 441 is calling on the District to return to the bargaining table.

“I am disappointed that we did not hear back from the District after our offer to get back to the table on Thursday,” said CUPE 441 President Dean Coates. “Our bargaining team was available, ready, and able to bargain all weekend, but the District did not respond.”

The CUPE 441 bargaining committee has developed a document highlighting their concerns with the employer’s offer that is available online at 441.cupe.ca.

“Our members want to get back to classes to support our students,” said Coates. “The whole community understands the importance of wage parity and we need the employer to find a way to make this work. We need to end this strike and get students back in class.”

CUPE 441 members have been on strike since October 28. The outstanding issue remains as wage parity. Picket lines will remain up at all schools.

SAANICH — CUPE Local 441 members are being joined on the picket line this morning by parents and their children. The community group “Families Rally to Support CUPE 441” have organized the event on Facebook. They will be holding a rally and walking the picket lines with CUPE members this morning from 9 to 11 am at Brentwood Bay School and at Sidney Elementary this afternoon from 12:15 to 2:45 pm.

The group has hosted a petition on change.org that has garnered almost 1,300 signatures.

“Parents are standing with us because they want their children to get the education they deserve,” said Coates. “Until we address wage parity, our district will continue to lose people and be a training ground for EAs who then move to neighbouring districts, leaving Saanich understaffed.”

Coates has asked the employer to return to the table and address low wages for all members in the local.

Members of CUPE 441 reviewed highlights of the agreement at a membership meeting on Wednesday and gave clear direction to the bargaining committee that they wanted to continue job action until full wage parity is achieved.

CUPE 441 took job action on October 28 over the issue of wage disparity. Today marks the tenth day of their strike.

SAANICH – Bargaining broke off late last night after three days of the latest round of negotiations between CUPE 441 and School District 63.

“I am disappointed that we did not reach an agreement that the bargaining committee felt they could recommend to members,” said CUPE 441 President Dean Coates. “Our efforts to be creative and move toward the employer’s position were not reciprocated and the employer would not add any additional funding.”

The local will not be discussing details of the agreement until they have provided information about the package to their members and gotten their direction at a closed CUPE 441 meeting today.

CUPE 441 members have been on strike since October 28. The outstanding issue remains as wage parity. Picket lines will remain up at all schools.

SAANICH — CUPE Local 441 will be bargaining with the School District this afternoon following an informal meeting this morning between a District representative and CUPE 441 President Dean Coates.

“Both parties recognize how difficult this strike has been for families and students in Saanich, as well as for our members and teachers,” said Coates.

A location is being determined and the parties will meet this afternoon.

“Local 441 is committed to working hard to reach a deal that meets the needs of our students and members so that we can be back in classes this Monday,” said Coates.

CUPE 441 will not be making any media comment during bargaining.

CUPE 441 took job action on October 28 over the issue of wage disparity and have been walking the picket lines for five days. 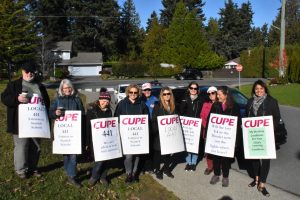 SAANICH – After two failed attempts at mediation, K-12 support staff in School District #63 walked off the job this morning. The union served 72-hour strike notice on Wednesday, October 23 but had hoped that the parties would have gone back to the table and negotiated a deal that addressed longstanding wage parity issues.

Following the bargaining committee’s rejection of the employer’s offer, CUPE 441 sought mediation to reach a deal but the two sessions were unsuccessful.

“We have let the employer know that we are available around the clock to sit down and come to a settlement,” said CUPE 441 President Dean Coates. “We are disappointed to be on strike, but we need to gain fairness for our members.”

The two sides remain unable to reach a settlement after seven months at the bargaining table.

“Our members go to work every day to ensure that students in our schools are safe and thrive,” said Coates. “We really appreciate the support shown to our members by the Saanich Teachers’ Association, parents and the general public.”

Visit the CUPE BC gallery to view photos.

“Our local is profoundly disappointed that we were unable to come to an agreement and we are available to meet with the employer any time, 24/7,” said Coates. “Our goal was always to reach an agreement that addresses members’ needs without disrupting students and families in Saanich.”

CUPE 441 President Dean Coates said that the local was unable to reach an agreement that addresses the longstanding concerns of their members. Workers in School District 63 (Saanich) have received substantially lower wages than their counterparts in Sooke and Victoria for decades and want comparable wages with other districts on the South Island.

The local bargained with the employer on six occasions and participated in two sessions with a mediator in an attempt to reach an agreement. A large number of members voted in August with an overwhelming majority voting to take job action if necessary.

CUPE 441 President Dean Coates said that the bargaining committee will be working hard to reach a settlement.

“Our members are dedicated and care deeply about the students they support, but need to be able to support their own children and families as well,” said Coates.

The local represents nearly 500 K-12 support staff workers. The members voted overwhelmingly at the end of August to take job action if necessary.

There are no upcoming events.

My Tweets
My Tweets